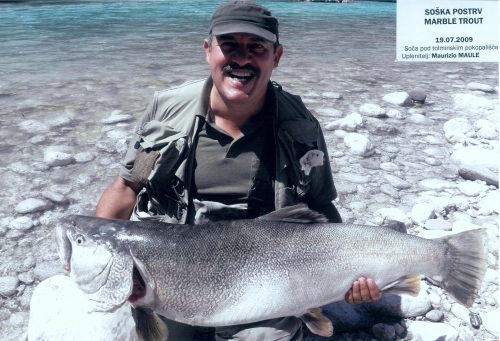 The largest marble trout ever was caught by an Italian journalist from Milan, Maurizio Maule. He got lucky on 19 July 2009 when he pulled a monster out of the water, measuring 120 cm in length, and weighing 22.5 kg.

This record fish lived in the Soča below the Tolmin cemetery for a good ten years. Considering its size, the fish was relatively young. Because it was sterile, it hadn’t lost its energy on reproduction. This beauty from the Soča was also a big challenge for Mr Toni Strgar, a taxidermist from Bled. Mr Lucijan Rejec, the then chairman of RD Tolmin, pointed out that no written records of a marble trout weighing more than 16 kg and caught by flyfishing had existed until then.

This was, however, the second largest marble trout every caught in this area. A couple of years ago, a dead fish, which was a centimetre longer and weighed 2.5 kg more, was found in the lake at Most na Soči. 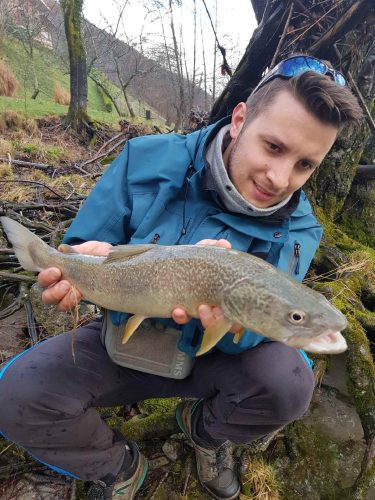 The Soča valley, along with its tributary valleys and rivers, is an area that has been settled by humans since ancient times, as confirmed by numerous archaeological sites (Divje babe, Most na Soči, Tolmin, Kobarid, Bovec, etc.).
Extremely valuable prehistoric finds were those from the foot of the Kozlov Rob in Tolmin, testifying to the fishing activities in the distant past. As a tool for the afterlife fishing, hooks were found among other burial offerings. This makes it clear that hooks were used for fishing even by our prehistoric ancestors and that they were well aware of the important role fish can play in nutrition.
The early fishing hooks dating back to somewhere between 10th and 9th century BC were unearthed at the site at the foot of Kozlov rob in Tolmin. During excavations at the Tonovc Castle near Kobarid, hooks from the 6th century AD were found.