THE EVOLUTION OF CLUB

Tolmin Angling Club celebrated its 70th anniversary of its founding in 2017. It was first founded as the Fishing Cooperative of Tolmin on 10 March 1947 by its 21 members. In 1952, it was renamed into the Tolmin Fishing Society. Its current name – Tolmin Angling Club – was adopted in 1975.

In 1985, the Freshwater Fisheries Act was adopted, giving Tolmin Angling Club the authority to manage the Tolmin fishing district, and it has remained so ever since.

In the founding year, the club had 52 members. By 1969, the number had risen to 200, while in 1978 the club had 400 members. Two years later, there were more than 500 members. At first, the members were mainly the residents of the then Tolmin municipality. At the time, fishing was not considered a sport, and the fish caught was a treat on the fisherman’s kitchen table.

In the eighties, the members started coming from other parts of Slovenia, in particular from the Nova Gorica region. The membership numbers reached a peak in 1987 when the club had a total of 703 members and 104 junior members.

Following the independence of Slovenia, the number of members dropped and had remained below 400 until 2007.

Currently, there are about 400 permanent members and 40 junior members in the club. The club is registered and operates in compliance with the Societies Act of the Republic of Slovenia.

RESEARCH IN TOLMIN ANGLING CLUB AND CONSERVATION OF MARBLE TROUT

The discovery of a genetically pure population of marble trout in the Zadlaščica has, thanks to Tolmin Angling Club, led to intensive research activities, especially after 1993. Basic research on marble trout began as early as in the 1980s as a result of collaboration between the Fisheries Research Institute of Slovenia and angling clubs under the Association of Fishing Clubs of the Primorska region. In the 80s, the marble trout was placed on the Red list of endangered animal species.

Research activities began to include genetic research. In the 90s, the marble trout began to be separated from its crossbreeds by means of genetics. A conservation plan to save the marble trout was developed in 1996. Research and analyses were conducted by scientists from various research institutions, such as the domestic Biotechnical Faculty and other foreign research centres.

In more than 20 years of research, we have been able to collect a great number of relevant information that helps us manage our waters and conduct high-quality fish farming activities.

In 2003, Tolmin Angling Club joined forces with partner Ente Tutela Pesca del Friuli Venezia Giulia to collaborate on the Adriatic Grayling project with which it successfully applied for the funds within the framework of the Phare CBC, SMF. We had decided to conduct research into the Adriatic grayling to facilitate the preservation of the species of grayling inhabiting the Soča. 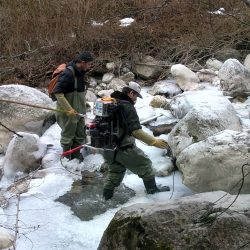 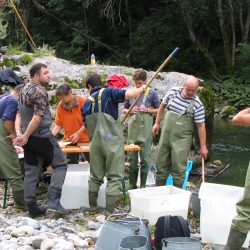 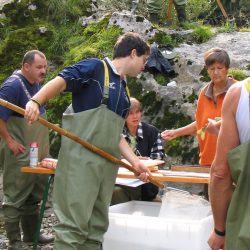 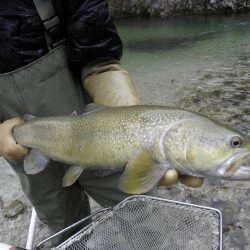