The Soča is one of the most beautiful rivers in Europe and it is a true pearl of nature. It is famous for its clear waters and dazzling emerald colour. The source of the river is in the heart of the Triglav National Park, the Trenta valley, at the altitude of 990 m. After it covers the distance of 138 km, it enters the Adriatic Sea at the Gulf of Trieste. RDT manages a section of the river from the bridge at the village of Čezsoča to the confluence with the Vogršček stream below the dam of the HPP Doblar. The entire upper stretch of the Soča from its source to Tolmin belongs to the European nature protection area Natura 2000.

The Soča is mainly inhabited by trout: marble trout, marble trout crossbreeds, the occasional brown trout and rainbow trout to support recreational fishing. The river is also home to Padanian goby and, downstream from the confluence with the Lepena stream, grayling as well. Depending on the winter and the amount of snow, the Soča may be a snowmelt river until summer.

Following its gentle current in the Bovec basin, it enters a stretch of deep gorges and rapids below the village of Srpenica. As it reaches Kobarid, the flow becomes gentler again and winds its way slowly towards Tolmin.

At Kobarid, the fish inhabiting the Soča are joined by Adriatic chub, Italian barbel, Leuciscus souffia muticellus, common minnow, Barbus meridionalis caninus and a few tench. Throughout the river’s course, one can also encounter Austropotamobius italicus.

After joining the Tolminka, the Soča enters the reservoir of the HPP Doblar. The reservoir stretches for some 7 km to the dam at Podselo. The depths of the reservoir are home to the largest specimen of marble trout as well as numerous other fish species.

The section of the river from the dam at Podselo to the Vogršček stream, where it leaves our fishing district, is rather humble. The Soča covers a distance of 1.3 km in this part, but mainly runs through the pipes leading to the power plant, leaving behind an almost empty river bed 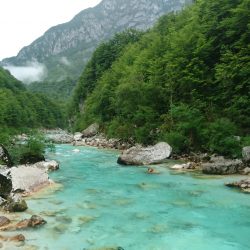 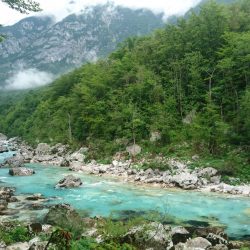 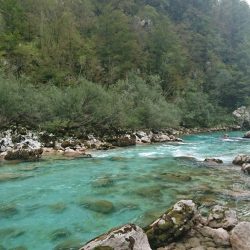 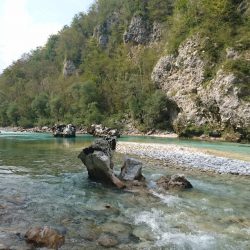 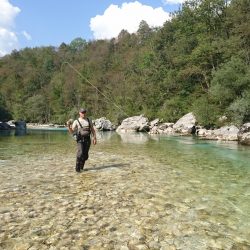 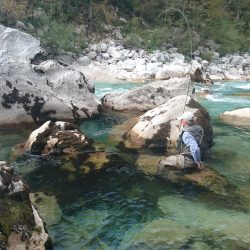 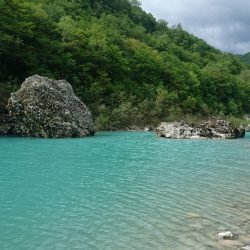 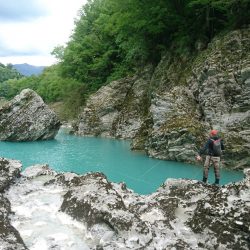 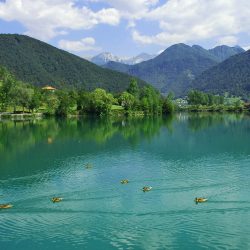